An Introduction to Natural Farming

Call it “Zen and the Art of Farming” or a “Little Green Book,” Masanobu Fukuoka’s manifesto about farming, eating, and the limits of human knowledge presents a radical challenge to the global systems we rely on for our food. At the same time, it is a spiritual memoir of a man whose innovative system of cultivating the earth reflects a deep faith in the wholeness and balance of the natural world.

Whether you’re a guerilla gardener or a kitchen gardener, dedicated to slow food or simply looking to live a healthier life, you will find something here – you may even be moved to start a revolution of your own.

Trained as a scientist, Masanobu Fukuoka rejected both modern agribusiness and centuries of agricultural lore. Over the next decades he perfected his so-called “do-nothing” technique: commonsense, sustainable practices that all but eliminate the use of pesticides, fertilizer, tillage, and, perhaps most significantly, wasteful effort.

Fukuoka wrote The One-Straw Revolution, first published in 1978, distressed by the effects of Japan’s post-war modernisation. In his later years, Fukuoka was involved with several projects to reduce desertification throughout the world. He remained an active farmer until well into his eighties, and continued to give lectures until only a few years before his death at the age of 95. 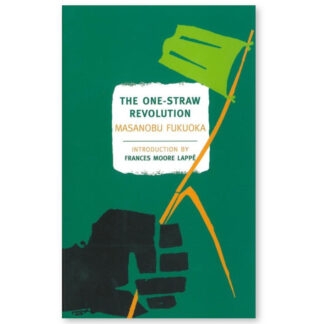