Shit in a Nutshell, 4th Edition

This 4th edition is a completely revised, expanded, and updated version of what has become an underground classic bestseller. The author draws from 40 years of research, experience, and travel, to expand and clarify your knowledge and understanding of… your poop!

Not only does the book address what to do with human turds, but it is also a priceless manual for anyone involved in composting or gardening, or looking for basic survival skills. There is no other book like this in print!

This is the 4th edition of a self-published book that no respectable publisher would touch with a ten-foot shovel. The 1st edition was published in 1994 with a print run of 600 copies, which the author expected to watch decompose in his garage for the rest of his life. Now, 24 years later, the book has sold over 65,000 print copies in the U.S. alone, been translated in whole or in part into 19 languages and been published in foreign editions on four continents.

The previous editions won numerous awards, including the Independent Publisher Outstanding Book of the Year Award, deeming the book “Most Likely to Save the Planet.” The book has been mentioned on such diverse media outlets as: Mother Earth News, Whole Earth Review, Countryside Journal, The Journal of Environmental Quality, Natural Health, NPR, BBC, CBC, Howard Stern, The Wall Street Journal, Playboy Magazine, Organic Gardening Magazine, the History Channel, Tree House Masters, and many other national and international venues. The Humanure Handbook was something of an accidental literary phenomenon. Joe Jenkins began writing the book as a master’s thesis while attending Slippery Rock University’s Master of Science in Sustainable Systems program in northwestern Pennsylvania in the early 90s. Not content with academic convention, but fascinated with the topic of humanure composting, Jenkins decided to convert the book’s language into a popular format and self-publish the thesis as a book.

Joe maintains a business in north western Pennsylvania (Joseph Jenkins, Inc.), where he resides on 143 acres with a large garden, an orchard, several family members, and a compost pile or two. Jenkins speaks at various venues when time allows, provides consulting services and maintains his publishing business. 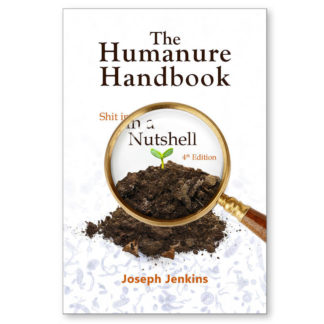