Pioneers of the Deep Future

The dominant culture of industrial civilisation is highly materialistic, holding up Western-style, consumer lifestyles as the path to happiness and fulfilment. But consumer lifestyles are failing to satisfy the human craving for meaning, and they are degrading our planet in ways that are grossly unsustainable and unjust. We desperately need to explore or rediscover less materialistic, ‘simpler’ ways of living.

‘Simple living’ refers to ways of life based on notions such as frugality, sufficiency, moderation, and mindfulness.

This anthology brings together twenty-six short essays discussing the most significant individuals, cultures, and movements that have embraced simple living throughout history. What did Buddha and Jesus think about simple living? What contribution did the ancient Greeks and Romans make? How do the Amish and the Quakers live? And why did Henry Thoreau leave his hometown to live in the woods? Readers will also gain insight into the lives and philosophies of people like Mahatma Gandhi and William Morris, and learn about contemporary eco-social movements, such as those based on permaculture, intentional communities, degrowth, and voluntary simplicity. This deep but engaging book examines these great moments in the story of simple living, and many more, but it looks backwards in order to shed light on the present and future. Read it and be inspired.

‘This engaging book raises one of the key questions of our times, presenting a rich tapestry of perspectives on what it means to live simply.’
– ROB HOPKINS, The Transition Handbook

‘Simple Living in History challenges the mentality of waste and extravagance that defines modern industrial lifestyles, reminding us that the answers we need have been here all along, waiting for us to notice them.’
– JOHN MICHAEL GREER, The Wealth of Nature and Green Wizardry

This site uses Akismet to reduce spam. Learn how your comment data is processed.

Only logged in customers who have purchased this product may write a review. 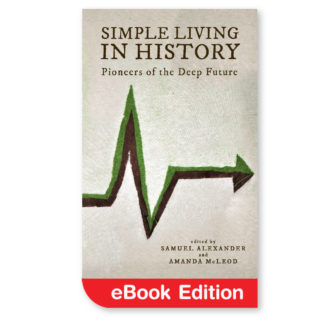