Art and Aesthetics at the End of Empire

What role might art need to play in the transition beyond consumer capitalism? Can ‘culture jamming’ contribute to the necessary revolution in consciousness? And might art be able to provoke social change in ways that rational argument and scientific evidence cannot?

Available as an extended eBook entitled Art Against Empire, which includes an extensive opening essay plus a page of text to accompany each image.

In this stimulating new book, degrowth scholar Samuel Alexander explores these important questions by curating a stunning array of ‘culture jamming’ images from a range of counter-cultural artists. By turns provocative and inspiring, the reader is exposed to art and images that challenge the status quo and expand the horizons of what alternatives are possible. This book is an abridged, image-based version of Art Against Empire: Toward an Aesthetics of Degrowth, in which Samuel Alexander advances the degrowth movement by establishing the theoretical foundations of degrowth aesthetics.

An extract from the acknowledgments…

“Late in 2016 I sent an invitation to my online networks calling on artists, graphic designers, illustrators, and renegade marketers to be in touch if they wanted to critically explore the ideas of consumerism, capitalism, degrowth, permaculture, and voluntary simplicity, by way of ‘culture jamming’ images. The goal was to produce art that tripped people up; art that disrupted people’s sense of normality, expanding the imagination and opening up space for new ways of living, thinking, and being. Within a few weeks of that invitation an army of sixty artists had formed, eager to put their creative energies to work. This book is the result of that process, which I called The Dark Cellars Project.

To the artists and activists who have produced the 170 images and artworks that comprise the substance of this book: I admire you; I thank you; I salute you. Your creative energies enrich my spirit and I am confident others will be similarly affected, challenged, and uplifted. This is not my book, this is our book. More precisely, this is your book. I feel a particular debt of gratitude to Chaz Maviyane-Davies, Julie Reason, Lena Singla, Michael Leunig, Pawel Kuczynski, Robbi Wymer, Steve Cutts, James Porto, Mark Henson, John Holcroft, and Maria Pena.” – Samuel Alexander 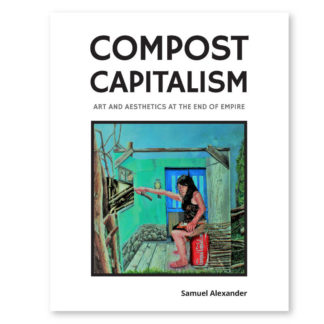